Jellyfin supports Post Processing of recorded Live TV shows. This can be used to transcode the recording to a specific format that does not require transcoding on the fly when playing back, extract subtitles, remove commercials, and more.

There are several different ways to set up your post-processing script, and this largely will need to be changed to your individual use case.

Described below is one way to do post processing, there may be other ways (other ways may be more efficient, too) to run your post-processor.

Mess around with this to change to your needs. Search around, post questions to the Jellyfin Reddit Forum or elsewhere, and others may be able to help. Logging is your friend! Make sure your script(s) logs adequately to a file or elsewhere in order to troubleshoot any issues you may encounter, as any output to stdout/stderror will not be seen in the Jellyfin logs.

Jellyfin runs the script you specify in the Admin Dashboard DVR settings with a command line parameter of the filepath automatically when recording finishes.

Set "Post-processing application" to your shell script which calls your actual post processor (details of this 'actual' post processor script below). In this example, that would be /path/to/run_post_process.sh 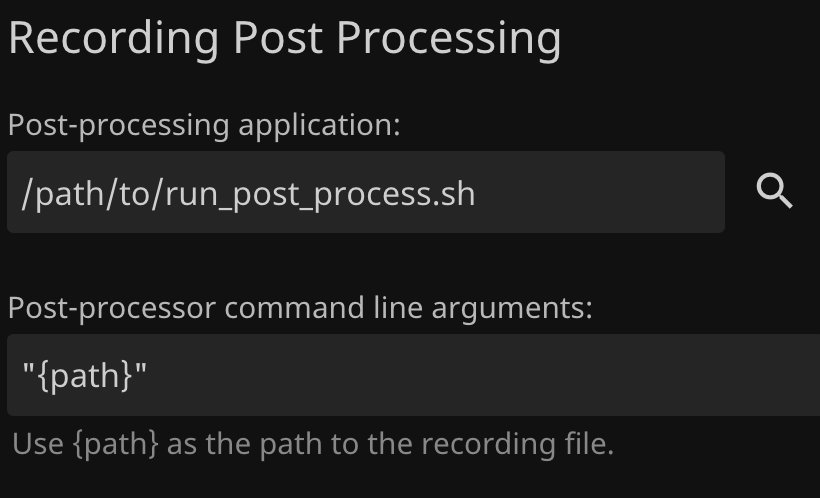 With the settings above, the server executes this command when running the post processor:

In the sample script below:

Post Processor Python Script (to be run by run_post_processor.sh)​

In this example, a python script is where it all goes down. I chose to use Python primarily because of how adaptable it is, and various third party extensions and packages that make it ideal for a post-processing script. This script can be customized to fit your individual requirements.

In the sample script:

This script is too much to post here, so a link to a GitHub Gist is provided. Comments are listed that describes what each section does.

Once you have post processing working in a basic format, there is loads more that can be done!